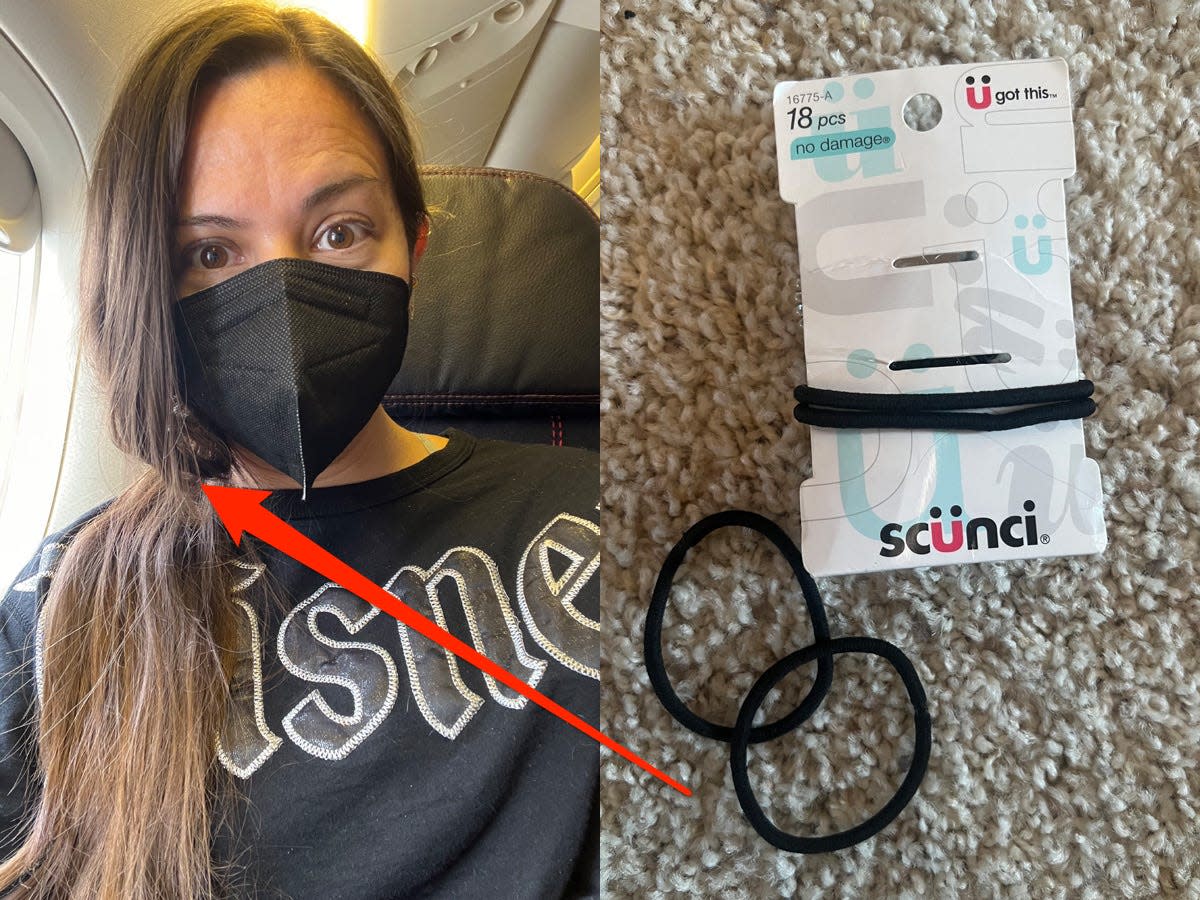 In July, I traveled abroad for the first time on a 10-hour non-stop flight to Paris, France, and was a little anxious about what to pack.

Since moving to California from New Jersey a few years ago, I’m used to five or six-hour cross-country flights.

But a 10-hour direct flight to Paris still seemed daunting.

On my flight there, I had a window seat. Though I had a carry-on with me, I hate disturbing others to rummage through an overhead bin so I stuffed everything I thought I’d need into a backpack. As my personal item, the backpack was able to stay under the seat in front of me for the duration of the flight.

Here’s what I regret not packing, and what I’m glad I had tucked away in my trusty backpack.

I was happy to have my Bose noise-canceling headphones.

Bose headphones are expensive, but I’d say they’re worth every penny. My over-the-ear wireless headphones greatly reduce the loud sound of the plane as well as noise from fellow passengers.

Whenever I removed them to speak to a flight attendant, I was taken back by just how much background noise the headphones blocked out.

I also made sure to have a backup pair of wired earbuds on hand too, for when I needed to charge my wireless ones or in case I had issues with Bluetooth connectivity. But Air France provided ear plugs for all passengers, too.

Though I packed a few physical books, my iPad mini was the item I used the most for in-flight entertainment.

I always imagine I’ll be productive on long flights, so I like to be over-prepared with hard copies of books, an iPad full of other downloaded audiobooks, comics, shows, and movies, and a journal in case I feel like writing . This is almost never the case.

I could’ve ditched the tangible books that weighed down my backpack because I gravitated to my iPad mini.

Since I write about TV and movies, I’m always trying to catch up on something, and this was the perfect opportunity to download some series I had been wanting to check out and stay current on, including “Westworld,” “All of Us Are Dead,” and “Ms. Marvel.”

I decided to catch up on “Ms. Marvel” so I wouldn’t be spoiled online after my flight. The best part was that my Bluetooth headphones connected to the iPad so I didn’t have to worry about a pesky cord getting in the way of my slightly cramped quarters.

My Trtl wrap ensured my neck didn’t get stiff and helped me feel more comfortable.

I don’t like packing bulky items if I can help it. A few years ago, I started using Trtl’s slim neck-support travel pillows and they’ve become my go-to when I’m flying for more than two hours.

I prefer these to bulkier neck pillows I often see people traveling with because the Trtl wrap is super soft around your neck, lightweight, and doesn’t take up much room in your bag.

The only downside was that the pillow, which you’re supposed to lean an ear against, wasn’t designed to be worn with headphones or a mask.

Having all three on together made for an uncomfortable situation. My mask started poking me in my eyes and the travel pillow and headphones competed to be closest to my ear.

I was impressed by this reusable prepasted toothbrush that made it simple to keep my mouth feeling clean in between two meals on a plane.

I figured it would be tough to grab ahold of my toothbrush, toothpaste, and any other toiletries to brush my teeth and freshen up during a long flight.

Since we were given a dinner meal shortly after take off and a breakfast meal before landing, I didn’t want food particles sitting around in my mouth for that long and wanted a simple solution.

Though I had a toothbrush and floss packed away, I had a prepasted toothbrush with me.

It was my first time using one, so I had no idea how effective it would be, or really knew how it worked. But it turned out to be perfect for on-the-go use.

The mint-flavored toothpaste came dried onto the toothbrush and when I wet the brush, there was more than enough on there to get the job done. It’s made for an easy and non-messy brushing experience.

The best part is that the toothbrush is reusable so I’ll take it on my next trip.

I have really long hair so I was glad I had a few hair bands to tie it back while eating and wearing headphones.

My Scunci ties came in handy when I was served meals during the flight and wanted to avoid getting my hair into my food or drink.

The hair ties also helped keep my hair from getting caught inside my headphones or from becoming a staticky mess when I put my travel wrap around my neck.

I was glad I packed two portable chargers, but I really only needed my phone’s charging wire.

Since someone was picking me up in France when I landed, I needed to make sure I had phone access after a long flight and was prepared with two portable Mophie chargers on hand.

Because Air France had charging stations at every seat, I only needed my iPhone wire to plug in and make sure it was juiced.

Having the portable chargers — which I needed later on my trip anyway — was a precaution in case my seat outlet wasn’t working.

I was glad I brought some disinfecting-wipe packages with me to clean the entire seat, tray table, screen, and plane window.

In addition to a small hand-sanitizer bottle, I brought these travel-sized disinfecting wipes to give a quick swipe over the seat belt, chair, armrests, screen, table tray, and anywhere else my hands may touch.

I also wiped down the wall and window, too, since I had a window seat on the way there. I knew I’d wind up leaning my head against those areas at some point.

I packed a few of the wipes so I had enough for both plane rides.

Though I made a lot of smart choices, I made a few crucial mistakes. My biggest regret was not packing a sleep aid like melatonin on my way there.

Since Paris is nine hours ahead of Los Angeles, I knew the time adjustment would be the most difficult for me. It felt pertinent to get some sleep. However, since it was my first time abroad, I was so excited that I found it difficult to calm down.

Unfortunately, I didn’t have a sleep aid on me. As a result, I wasn’t able to rest on my flight at all. This wasn’t great news when I had plans for the day.

I wound up staying awake for over 30 hours, which threw me off for the next few days as I navigated a stacked itinerary.

Once in Paris, I made sure to find some melatonin for my even longer flight home. That helped me sleep more easily.

I brought a refillable 10-ounce Yeti tumbler with me to keep liquids cool, but wish I had a larger refillable bottle on hand.

Typically, I love Yeti’s insulated tumbler because it keeps liquids cool or hot for hours on end, but it fell out of my backpack’s side pocket on both legs of my trip.

When I arrived back in the US, it fell out for a final time. This time, the lid came off and water spilled all over the floor, which was a bit embarrassing.

I wish I opted for one of my larger, more fail-safe Contigo water bottles. These wouldn’t have spilled — even if they did slip out of the pocket — and also would’ve held more water to keep me hydrated during a heat wave in Paris.

I should’ve worn comfier shoes on the plane.

I was going to be spending a few days in Paris’ Disneyland parks and thought it would be a great opportunity to wear some fun Mickey-themed Vans.

Unfortunately, the sneakers take up a lot of suitcase room. I thought I could suck it up and wear them on the plane. If they became uncomfortable, I could swap them out for my comfy Sanuk sandals during the flight.

Sitting in a window seat, I quickly realized I wasn’t going to be able to contort my body to unlace my tightly-tied Vans and squeeze out of them.

This was rather short-sighted on my part. I mentally kicked myself for not swapping the sneaks for sandals before boarding my flight.

I decided to live with the consequences and stayed stuck in them for all 10 hours of my flight to Paris and — since my luggage was taken the moment I got to my hotel to be dropped off in my room later — was then forced to continue wearing them for the rest of the day after I landed.

On the flight home, I coughed the Vans in my checked luggage. On a long flight, I now know I should always choose comfort over fashion.

I brought my own blanket but was surprised to learn I received one in economy.

I had never flown internationally so I always assumed blankets and pillows were things you only received if you sat in first class.

As a result, I packed a thin blanket in my backpack in case I got cold.

I was blown away when I first got to my seat and saw that Air France provided everyone on board with pillows, blankets, and free headphones to use.

I didn’t wind up using the blanket because I never got chilly, but if I realized Air France gave out these amenities, I wouldn’t have brought my own blanket to save some space in my bag.

I really wished I didn’t bring an unfinished coffee onboard because there wasn’t a cup holder large enough for it.

I was convinced that if I kept myself awake for the first part of the flight that I would be able to fall asleep later, so I brought a pretty full cup of coffee on board.

I instantly regretted this decision when I arrived at my seat and realized I wasn’t going to have a cup holder large enough to hold it. I’m a slow drinker, so I never even finished the drink. This meant I had to hold it in between my legs for most of the flight.

I later realized I didn’t need to bring any drinks aboard with me anyways because I was offered water and coffee plenty of times throughout the flight.

Read the original article on Insider