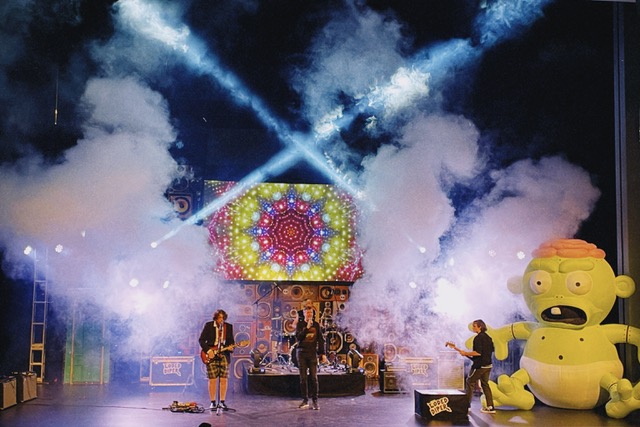 One of my favorite procrastination activities is scrolling through lists of random upcoming Nashville events. One night, I happened to stumble upon the book launch for author Jeff Kinney’s newest children’s book, “Diary of a Wimpy Kid: Diper Överlöde,” which was to take place at Ingram Hall at Vanderbilt’s Blair School of Music on Oct. 28. The irony of hosting this event on Vanderbilt’s campus despite college students not matching the book’s target demographic was not lost on me. However, after reading more about the event, I realized it was more than just a book talk; it also included a show with live performances from the book’s imaginary band, Löded Diper.

As silly as it sounds, I bought tickets immediately. Growing up, the “Diary of a Wimpy Kid” books were an integral part of my childhood. If the fictional band that I laughed at when I was younger was about to come to life, there was no way that I was missing it.

When I arrived, it felt as though I was transported into the comic book pages. The band’s tour van was parked outside the theater. After I took a photo with the van, I stepped inside the hall, where I was met with red carpets, free merchandise and a copy of “Diper Överlöde.” The sounds of screaming children filled my ears, and their parents were just as excited to be there. As a college student, I have to admit, I felt a bit out of place, but those worries quickly faded away when the show began.

Kinney made his grand entrance on stage through a blue porta potty (how appropriate). After a quick embrace with Parnassus Books owner Ann Patchett, Kinney shared stories about how he became an author, his troubles with touring during COVID-19 and a brief overview of his newest book by him.

He then taught the audience how to draw the character Rodrick from his books, and we were all given a piece of paper to follow along. I was complemented by a lady next to me on my own Rodrick rendition—life complete.

Next, Kinney called kids on stage for a Q&A and trivia questions. Although I remained reading in the audience, listening to the kids’ excitement about warmed my heart. He then invited parents on stage to embarrass their children by dancing to rock ‘n’ roll music.

Kinney then broke unfortunate “news”—the Löded Diper band that was supposed to perform was “running late.” In a comedic turn of events, Kinney recruited a college-aged superfan from the audience, a stagehand and a Domino’s pizza worker to play for the evening.

After changing into rock ‘n’ roll outfits, the newly formed Löded Diper played the songs “Should I Stay or Should I Go,” “Blitzkrieg Bop” and “I Love Rock and Roll.” I was shocked at how technically advanced this show was, with impressive lighting design, smoke and visual effects. From the clear vocals to the impressive drum playing, it truly felt like I was at an actual concert.

Another twist arrived when the original Löded Diper band walked on stage. In a moment of tension, Kinney declared that there should be a “Battle of the Bands.” The newly-formed Löded Diper performed an original song from the upcoming movie, “Diary of a Wimpy Kid: Rodrick Rules,” called “Can You Smell Us Now.” The original band followed with a lively and entertaining rendition of The Kinks’ “You Really Got Me.” Rather than declaring a winner, the two groups ended the night by coming together to perform “Smells Like Teen Spirit.”

In reality, the original band consisted of Landon Clark, Nico Holt, Josh Cook and Owen Wasterval, members of the North Carolina band Audiomelt. The “newly-formed” band was revealed to consist of members from the band Reservations at 8, based in Massachusetts, who went undercover in casual clothes for the performance.

Although this concert wasn’t what I had in mind for the start of Halloweekend, this was genuinely one of the most thrilling experiences I’ve had so far at Vanderbilt. Nothing beats feeling like a kid again, and this book launch definitely brought nostalgia and excitement to Nashville. I encourage you to hop online, find an obscure event… and maybe I’ll see you there.